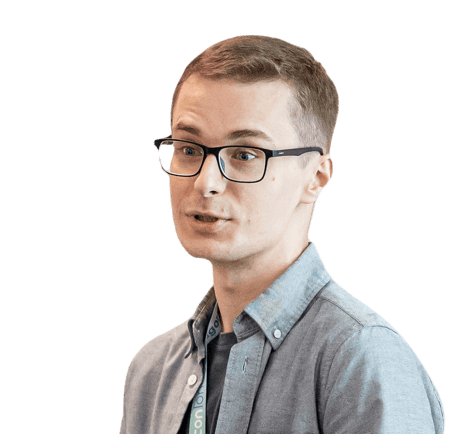 It’s a good practice to build separate apps for development, test and production environment. In case of mobile apps a good way to have separate configurations is usage of flavors.

Note: This article was written in July 2019. Since then many things have changed in Flutter. If you’re looking for a good support of flavors in Flutter apps, check out the very_good_cli.

In this tutorial you will learn how to prepare ordinary Flutter project to have 3 different flavors (dev, test and production) and how to handle build, signing and deployment with fastlane.

TL;DR Just go to the repository where all the flavors are already configured.

The concept of flavors is taken from Android apps and can be applied to iOS in various ways (more on this later). By incorporating flavors in your project you can build your app with different configuration options, styles or feature sets. In commercial projects it’s a standard way of distributing apps.

There are several great articles on build flavors just to mention:

In this article I’ll show a similar but a subtly different approach and focus mostly on iOS part. Presented way works really well for me and my colleagues. It’s been battle tested with several apps already and is getting better with each new project.

Flutter comes with built-in flavor support but default project is not prepared to handle them. All it takes to define flavors is to add and edit few files. There are multiple ways to achieve this and with each new project you’ll have a chance to improve your approach. Especially on iOS there are multiple ways to provide different bundle ids or configuration parameters.

In my daily job I use fastlane to automate apps deployment to QA and app stores. In this article I will show how to use flavors with fastlane but in general you can handle flavors manually or in typical CI environment like Codemagic or Bitrise.

Fastlane allows you to define specific lanes for each app in code like deploy_to_appcenter or deploy_to_store. A set of files can describe signing, build and deployment phases. Those can be reproduced both on developer’s computer, but also on CI/CD platform. Fastlane allows to automate provisioning and signing of iOS apps as well as screenshot capture or updating the description in store. This gives us a very convenient and reproducible way of distributing our app.

There is no native support of Flutter apps in fastlane but we can define fastlane configuration for Android and iOS projects and treat them as typical native apps.

In this article I use Flutter v1.7.8+hotfix.3 and demo app is created with Kotlin, AndroidX, and Swift support by:

It’s a good practice to create new projects with Kotlin and Swift support. AndroidX is a future of Android development so while starting new project you should definitely have it enabled. You will benefit from Swift later in your project when you’ll have to write some platform specific code.

How to configure Flutter project

In order to take the advantage of flavors in Flutter app you should define 3 separate main files1 that will handle all the configuration details different for each scheme. The easiest way is to rename main.dart to main_common.dart and create:

In each of them you can define respective configuration and later just start execution of the app from a common function.

The AppConfig class is a used to store some basic configuration options like name or API endpoints.

In main_common.dart you should replace the 3rd line with:

This step of the configuration you can investigate in commit a4c7ef8e.

How to build or run Flutter project

Typically you would run following commands to build flavored app:

Some important things to notice here:

In order to run the app with desired flavor in VS Code you can define your own launch.json configuration. Below you may find a sample I use in my apps. You may copy it to the configuration file that opens when you click the cog wheel on debug pad in VS Code.

At this point these commands would fail because we haven’t defined flavors in Android and iOS apps yet.

Defining flavors on Android is really straightforward. The only file to be changed is build.gradle in app directory.

Just add the following lines after buildTypes node and before closing bracket:

You can take a look at the exact diff here in commit cef5fbff. 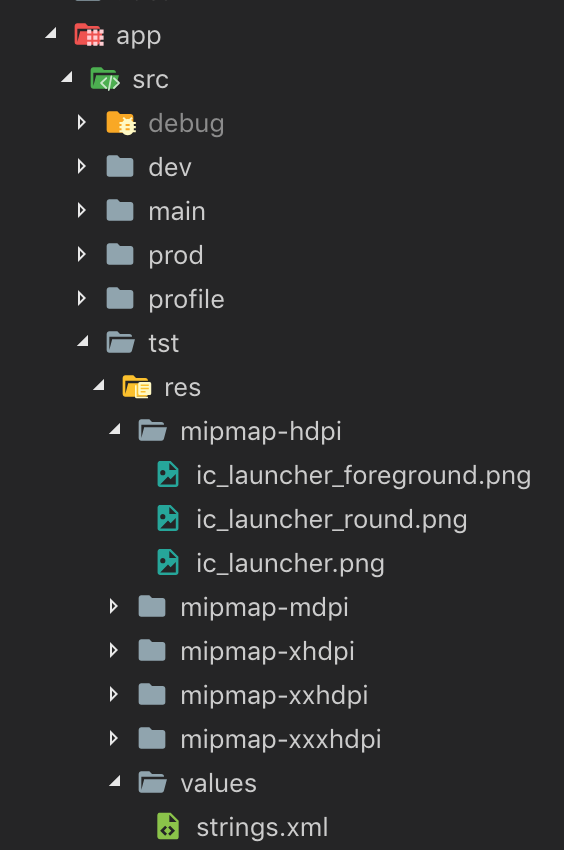 Flavors on Android allow us to define separate resources for each of them. E.g. you can have a special icon for QA builds or different strings resources. What you need to do to provide new icon is just create mipmap-... folders with icons in app/src/tst directory. The same works for any other resources and schemes.

At this point you should be able to build 3 separate flavors of the app for Android.

Typically, in iOS apps you can base flavors on build schemes. In order to configure this you’ll need macOS and Xcode. To start you should open ios/Runner.xcworkspace in Xcode. 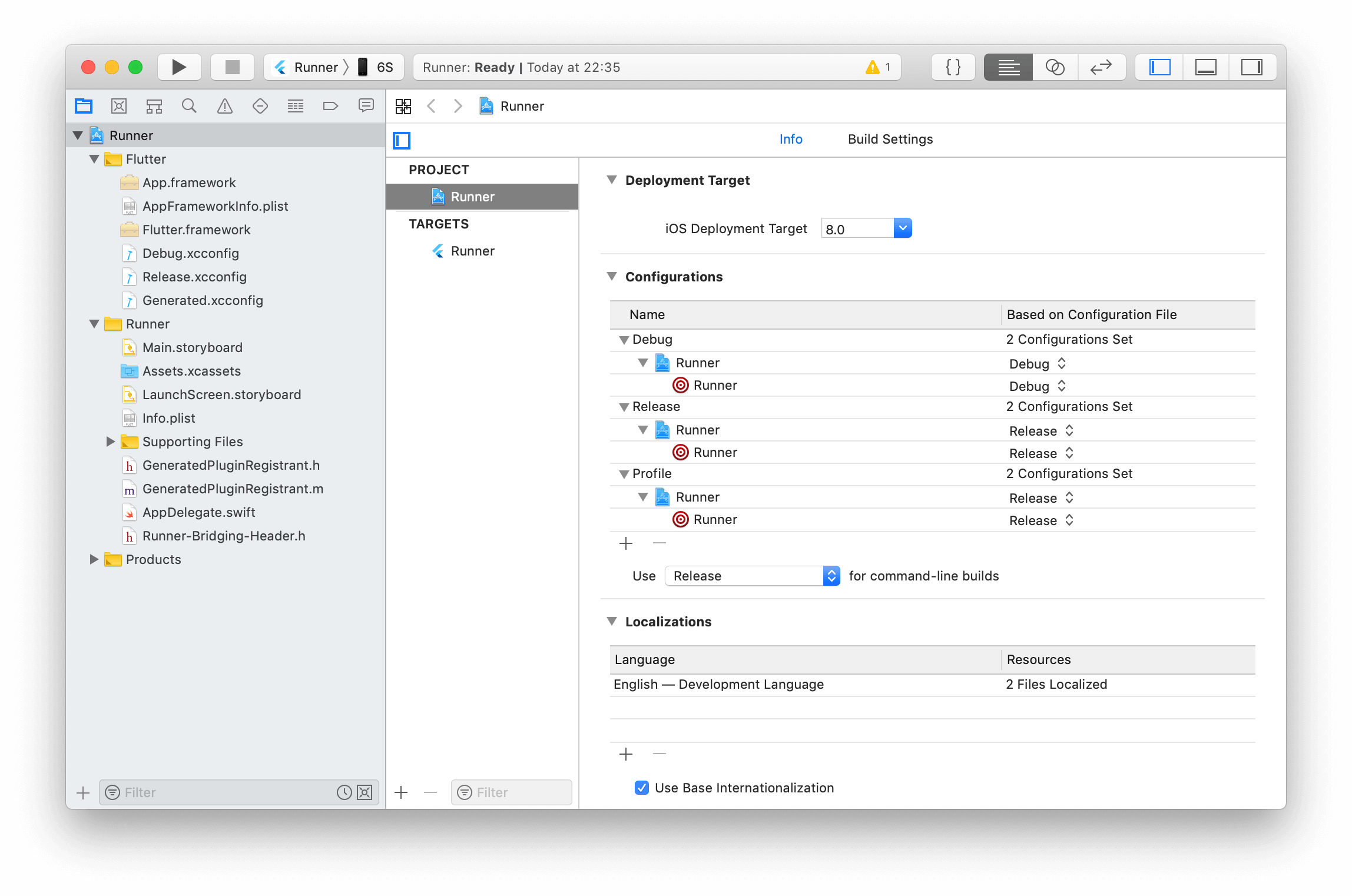 Default scheme for Flutter apps is Runner. We’ll define additional 3 schemes named exactly as the previously defined flavors i.e. dev, tst and prod. You should go to Product > Scheme > Manage schemes and add them via + button. Make sure the schemes are marked as Shared.

These files allow you to define custom variables that can be used later during build or in Info.plist file. We’ll define our custom app bundle ids here.

At this point you should copy and paste some build configurations and assign them to the respective scheme. There will be a lot of clicking and typing now so be patient.

Go to project settings in Xcode, select Runner and then Debug in Configurations section. Press Enter to rename it to Debug-dev. Then duplicate it and call it Debug-tst, and another with Debug-prod. Repeat the procedure for Release and Profile configurations. Then assign previously created schemes to respective configurations. You should end up with following layout: 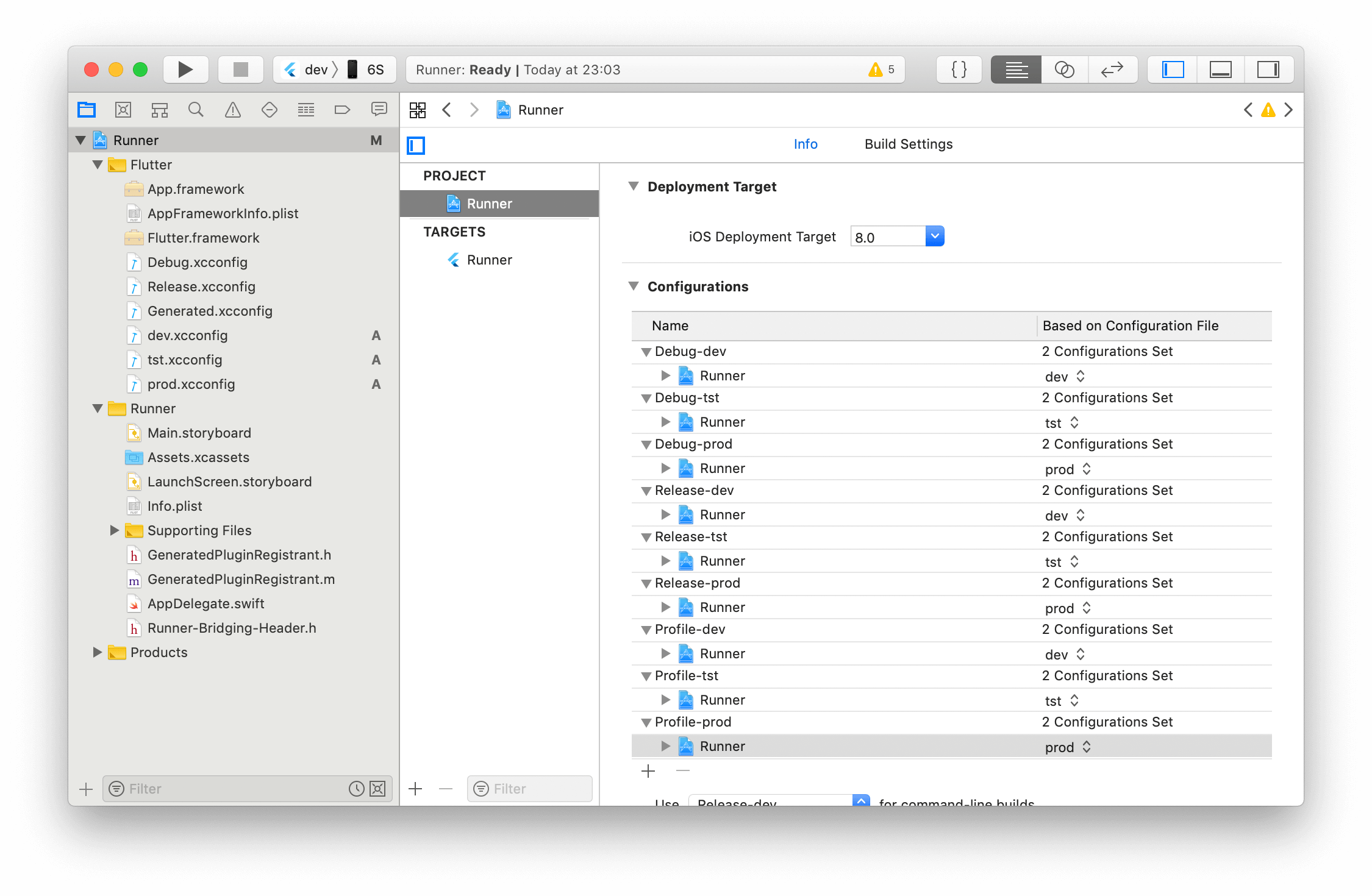 This should allow you to build your app with different bundle id per flavor. To make sure you can go to Build Settings of Runner target and look for Product Bundle Identifier position. 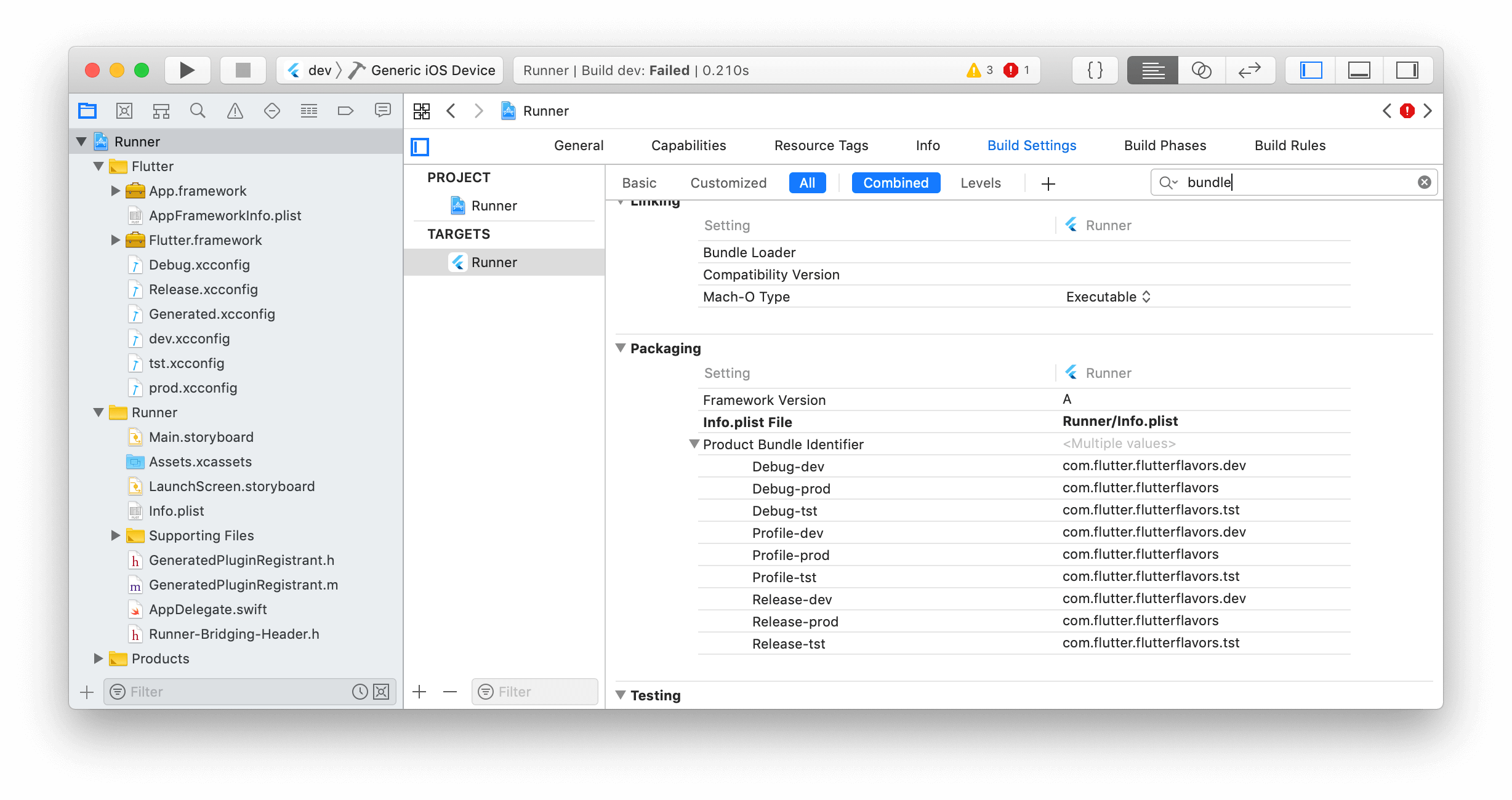 There is still one problem to be solved. When building the app Flutter takes into account the product bundle identifier visible in General tab of the target properties. So even with tst flavor you’ll see following output in console:

Take a look at the wrong bundle id for Release-tst scheme.

Fortunately, if we defined a PRODUCT_BUNDLE_IDENTIFIER variable in our tst.xconfig file this will be overwritten during the build so that generating and signing the .test bundle id will be possible.

Finally, we should update each build scheme with correct build configuration.

Go to Product > Schemes > Manage Schemes, select dev and click Edit. Now for each of the processes (Run, Test, Profile, Analyze, Archive) change the build configuration to -dev one. Repeat the process for tst and prod schemes. 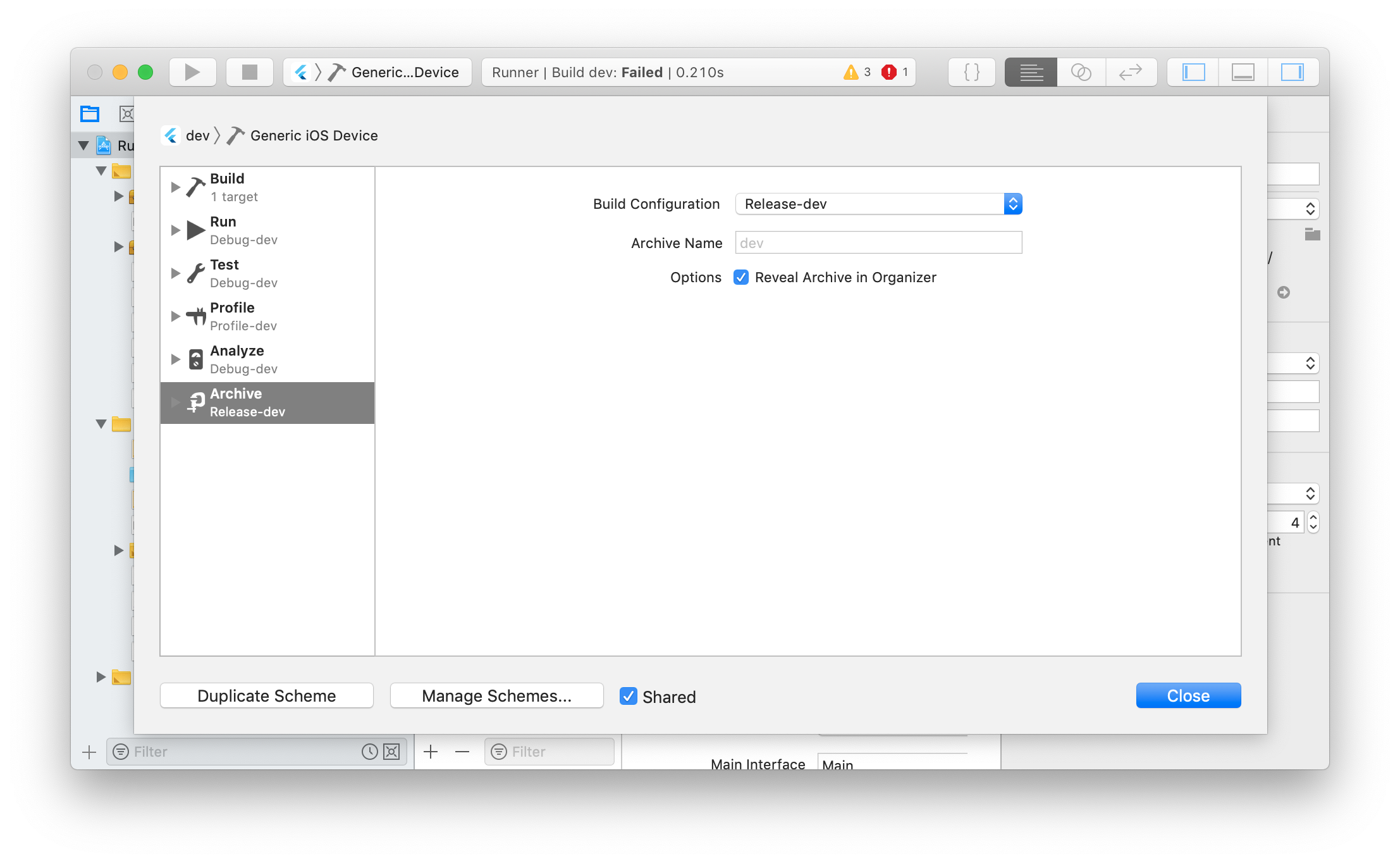 Go to ios folder in your console and initialize fastlane with manual mode (option 4.). In fastlane folder create Matchfile file next to Fastfile and Appfile.

After creating application ids and adding the files you should be able to generate provisioning profiles. Execute following commands and type desired bundle id when prompted:

Rebuilding and signing with fastlane

Unfortunately, it is necessary to rebuild iOS app to archive it and sign before deploying to testers or AppStore3. With custom flavors it is necessary to provide provisioning profile match map manually. I couldn’t make the fastlane to detect all profiles automatically. If anyone knows better way to do this, then please share!

To build the app with fastlane you should execute just:

The simplest solution that took me hours to find was just to delete bundle id from General tab in Xcode.

Now you should be able to have you .ipa archive ready to submit to AppCenter, Beta or directly to your testers.

Take a look at the commit a3c5512a to look through all the changes related to fastlane.

After reading this article you should be able to configure Flutter flavors on your own. There are almost limitless possibilities related to flavors, schemes and configurations. For instance you can have separate Google Services files or Facebook ids for each flavor. You can enable or disable some features for test builds. You can even create multiple apps from single code base.

I hope you learned something with me. See you soon in the next blog post 🖖.

Platform Views for Mobile and Beyond

At some point in the project it may happen that you need to use platform specific SDK that does not yet have a plugin available. And what’s more difficult yo...